Once in a while something comes along to just blow your minds. Something that is so seamlessly in tune with every facet of the production, harmoniously joyful, that it stops becoming theatrical and turns into something quite magical. The Animals and Children took to the Streets is such a production. A conjuring cornucopia of captivating concoctions that leaves the viewer completely spellbound.

The Animals and Children took to the Streets is currently wowing audiences at HOME and is from the mercurial tricksters that are 1927, a production company that specialises in synchronising performance and live music with handcrafted animation, illustration and film to create magical filmic theatre. They’ve wowed audiences before with their stagecraft having won plaudits for Golem, Between the Devil and the Deep Blue Sea and The Magic Flute. Their latest offering is in keeping with their whole ethos and combines their love of animation with live performances intertwined with a haunting soundtrack.

I’ve been to a fair few shows in my time and have seen a fair few shows trying to incorporate the use of film within their storytelling. Sometimes it works, sometimes it is nothing more than a gimmick that sticks out like a proverbial sore thumb. In The Animals and Children took to the Streets the use of animation is possibly the best I have ever seen in integrating it into their storytelling. Paul Barritt’s use of film and animation, projected quite cleverly onto three seemingly blank boards that effectively form the set, is simply stunning. The animation is not only sublimely grimey and avant garde in keeping with the style of the show they are putting on but is also effectively synchronized with the actors own performance. It is as if one cannot exist without the other! 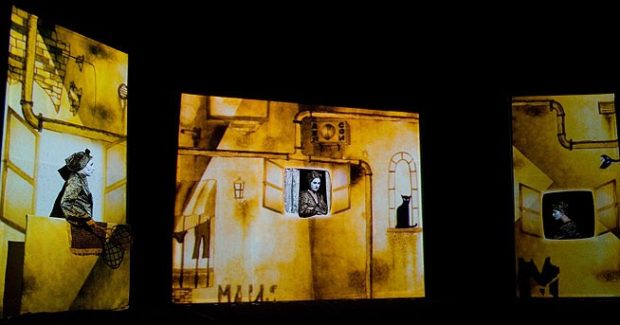 Whilst there is a modernity to this in terms of production values and the use of animation to tell what is essentially a classic dark tale, there is a lot to be said of how evocative this feels of being a classic piece of storytelling.

That starts with the story itself. There is nothing like a good yarn about the less privileged being preyed upon by the big bad evil wolf or how forgotten communities on the edge of society succumb to the horrors that affect the most vulnerable. This is exactly the vibe that 1927 evoke with a story of the Bayou, a neglected neighbourhood, where lies a sprawling stinking tenement block, where curtain-twitchers and peeping-toms live side by side. Our heroine, Agnes Eaves and her daughter, come to the Bayou and it is through them we are exposed to the horrors. For if you’re born into the Bayou, you’ll die in the Bayou.

This is as old school as it gets. Think of all those captivating stories you’d heard in your childhood that left you utterly engrossed, like those epic poems of old. Think Beowulf. Think Pied Piper. Think The Brothers Grimm. This is the essence of folklore and 1927 tap into that very vibe to tell you their story. Yes, the animation is brilliant, but it should not mask how well 1927’s brilliant minds – director and writer Suzanne Andrade and filmmaker Paul Barritt – have created a show that tells a story that can just draw an audience in.

Performing the multitude of parts are Felicity Sparks, Genevieve Dunne & Rowena Lennon and that’s about it. The show seems to be much bigger than you envisage for just three performers and that is to their credit. It is as if you are so enthralled in the characters, that you don’t stop to think of those on stage are maybe playing more than one part. And here once again the attention to detail in trying to keep with their whole steampunk imbued evocative style is admirable. All three with white painted faces seem like a travelling company of actors, a trio of babushkas, or old french mime artists, that go from village to village telling the locals a story of fear.

The other elements to this production are just as effective. The music is quite charming in the use of telling that story. It’s reminiscent of the Tiger Lillies and that eerie chilling feel that transcends the harmonies and melodies. I must also mention The Voice of the Caretaker by James Addie, which is wonderfully acerbic and monotone, that it is so intrinsic to what makes this show tick. (It’s a wonderful example of how well this show works, the gravelly voice of Addie, allied with the playful acting skills of Lennon, all beating in unison with the animation from Barritt’s magical mind.)

And what’s more, here’s a production that allows everyone to be utterly enchanted. The young, the old, the fanatics and the casual observer, are all utterly entranced. Not many shows can appeal to a vast array of audiences but that’s exactly what The Animals and Children took to the Streets does.

So don’t miss out, go with your kids, or go with your old folks, or your loved one, or with your mates, or just on your own, for this is a show that for an hour and a half will have you completely gripped and trust me it will not let go.

Verdict: Visually decadent, musically enchanting and acted with bewitching brilliance. A theatrical treat that will have us totally transfixed. Already one of the best shows I have seen this year, and I will be surprised if I see many others that are as good as this.

What: The Animals and Children took to the Streets
Where: HOME Manchester
When: 7th February 2019

1927, animation, HOME, home manchester, The Animals and Children Took to The Streets