Spark Plug sums up everything that is good about theatre in this part of the world. You have a Manchester based theatre company, Box of Tricks, that is a launchpad for the next generation of playwrights showcasing the region’s most exciting voices. In David Judge, you have a writer from Fallowfield whose autobiographical work has more than a nod to the places we have grown accustomed in this old town as well as to the faces we would no doubt recognise in our everyday lives. All of this being brought to you by HOME, which continues to provide a sanctuary for the region’s up and coming talent. What more could you ask for in a production?

David Judge’s work is a homage to not only his own upbringing, but also one that takes in the city’s sounds and sights. His ability to interweave the places we know and love with characters that we are all familiar with will make this a hit with most locals. Judge’s story is all about himself you see. More specifically it’s about a boy. A boy who has two dads. One white. One black. One present. One absent. It’s about how race plays a part in that boy’s life. About a love of Rod Stewart. And a love of Michael Jackson. A story that some will no doubt identify with and a story that most will no doubt will be engrossed with. 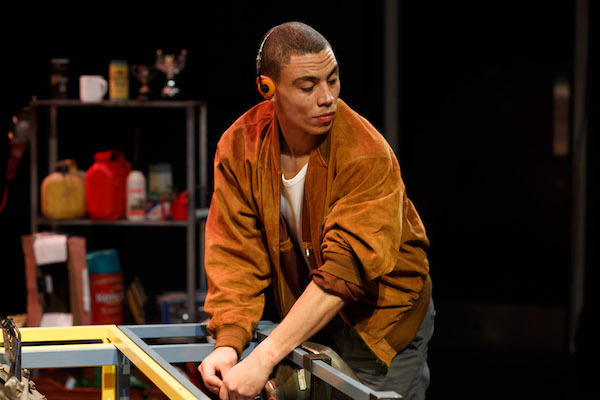 Telling the story is David Judge himself. A monologue whereby he takes a chronological approach to the events that have happened in his or his father’s life. Starting with the 1980s and tales of Ford Capris, as well as tunes from Rod Stewart ringing in your ears, we are treated to a series of anecdotal episodes that form the basis of Judge’s story.

Of course keeping an audience enthralled for nigh on 70 odd minutes takes some doing and Judge makes use from an array of props and clever little plot devices. The set by Katie Scott is conducive to Judge’s ability to transpose his story from his own verbal interchanges to focus on that fascinating stage. A car that is shaped from scaffolding allowing a chassis to be clearly visible is shrewdly used by Judge. And there are other nice little touches, using a little step ladder to indicate high rise blocks, or various props strewn about the place used for dramatic effect. 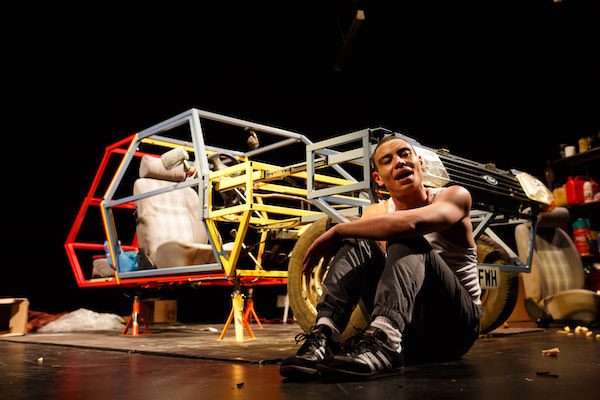 And then there is the music. David Judge Senior loves Rod Stewart. David Judge Junior loves Michael Jackson and throughout the music is woven into the story with craft and imagination. The music allows Judge to contextualise the time and the place, moving from the 1980s into the 1990s with consummate ease.

In most part tho, this story is about David Judge and in the end the production we see is all about David Judge and his capacity to tell that story. It’s never easy to deliver a monologue. You have to have game as the modern hip hop stars will tell ya. At times you have to have comedic skills to interject the seriousness with a laugh or two. At times you need to be confident about gaps in silence that allows the gravity of what you are saying to hit home. Then then are times when your delivery, the rhythmic in the words you choose to voice, are hypnotic in their utterance.

This is a story about David Judge delivered breathtakingly brilliantly by David Judge. The story and the man that tells it are pivotal to each other. It’s about as personal as it gets and it’s what makes this show such an affectionate hit.

Verdict: A compelling story of what it means to grow up with two dads. One white. One black. David Judge is utterly, utterly captivating, to the extent that you dare not take your eyes off him. Mesmerising!