It’s been a while since I watched something that has been so brutal as Mother Courage and her Children at the Royal Exchange Theatre. These are words that I do not use lightly. The Exchange’s latest offering is a stark adaptation of German dramatist and poet Bertolt Brecht famous play of the same name. It is a bold reimagining by Anna Jordan, set in a dystopian future, one which allows its star turn, Julie Hesmondhalgh, to cement her reputation even further, but by the end you are left bereft and disconsolate.

Of course Brecht purists will say that is exactly the point of Mother Courage and her Children, that there is very little left to be consoled by the watcher.

In the original Brecht version we have a story that is set in the 17th-century and takes place over two decades in 12 scenes. It’s main theme is that the futility of war is often lost on the many and no matter how much we would idealise conflict, the virtues of the few are often left unrewarded in such corrupt times. (Brecht’s masterpiece was also written against the rise of fascism in the 1930s and a response to the invasion of Poland by the Nazis)

Likewise in Jordan’s modern retelling, the themes of war are very much central to the story, set in a futuristic dystopian world Jordan felt that it was very much in keeping with what is going on in the world today. The displacement and movement of people, as well as how we are focussed on borders all plays a part in what that means to what we perceive as national identity.

What’s more this version boasts a musical flavour, with a kind of steampunk, 1930s Berlin infused visceral soundtrack to the story. Sometimes this works exceptionally well, sometimes, however, the musical element is jarring and you begin to wonder if the production really knows what it wants it to be. 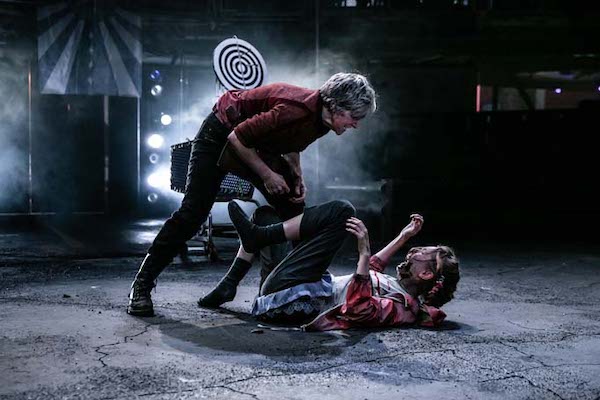 We are left in no doubt to these new political times with a set that echoes futuristic dystopia with its scrawled placards and at the centerpiece is what I can only describe as a hallowed ice cream van that provides the trading opportunities for those wishing to exploit the horrors of war. And there is a none too subtle tribute to the EU flag, which more than tips its hat to the turmoil of our current political situation

Playing Mother Courage is Royal Exchange alumni, Julie Hesmondhalgh. Once again she gives one of those performances you just come to expect from an actor of her calibre and experience. It is full of vigour and vitality, with Hesmondhalgh relishing the nuanced and complex role that is Mother Courage. Indeed, at times she savours the challenge of her character, this role that at times has to be a survivor, a protector and a capitalist opportunities, all of which she conveys with the sheer audacity of her acting prowess..

Her supporting cast more than just support her in her tenacious portrayal. The “Children” are just as captivating, with Conor Glean and Simeon Blake-Hall playing their parts of Eilif and Swiss Cheese to aplomb. Likewise Kevin McMonagle gives a powerful performance as the minster, proving to be an excellent foil to the machinations of Mother Courage. 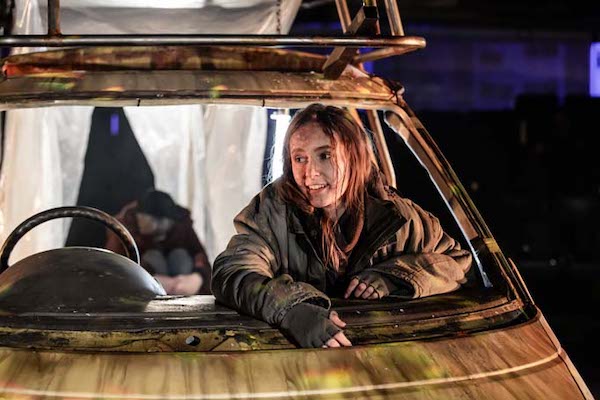 However, it is Rose Ayling-Ellis as Katrin, the dumb mute daughter that is the jewel in this particular crown. Ayling-Ellis is quite brilliant. I cannot heap praise enough on Ayling-Ellis’s debut at the Royal exchange. It calls for a subtle depiction of a character that is at times beguilingly joyful, bombastically hopeful and bemusingly resilient before the horrors of wars take their toll. One particular scene has her character crawling across the stage in agony that can only bring an audience to its knees in disconsolation.

Verdict: A brutal and bold adaptation of Bertolt Brecht’s classic anti-war play in this modern update. Set in the future, Julie Hesmondhalgh and Rose Ayling-Ellis shine in a show that has us all feeling a little fearful for the world.

What: Mother Courage and her Children
Where: Royal Exchange Theatre
When: 15th February 2019