Good old gallows humour allows us to revel in the frivolity of the most darkest of subject matters. At first glance, Oldham Coliseum’s current fare, A Skull in Connemara, reads like one of those productions that seems designed to be naturally disturbing. The story of a gravedigger whose wife had died under mysterious circumstances several years ago. When the time comes to exhume bodies from the Connemara graveyard he finds her bones are missing. [Cue dramatic pause of silence]. Yet, for all of its dark undertones it is the overriding hilarity that leaves a lasting impression on the audience.

Written by Bafta and Oscar winning writer Martin McDonagh, whose list of achievements is worthy of a mention in a small town blog like this. Cinematic hits such as In Bruges, Seven Psychopaths and Three Billboards Outside Ebbing, Missouri have garnered three BAFTA Awards and two Golden Globe Awards between them. Therefore, when the chance to see his written work performed on the stage came along, I decided to grasp it with both hands.

A Skull in Connemara represents some of McDonagh’s early work and forms part of The Leenane Trilogy, which sees events played out in and around County Galway. In this second installment, we only ever see four characters. John O’Dowd stars as the leading protagonist as gravedigger Mick Dowd, aided and abetted by Liam Heslin playing the oafish sidekick Mairtin Hanlon and Jenny Lee playing the irascible MaryJohnny Rafferty. Griffin Steven completes the quartet as Thomas Hanlon. 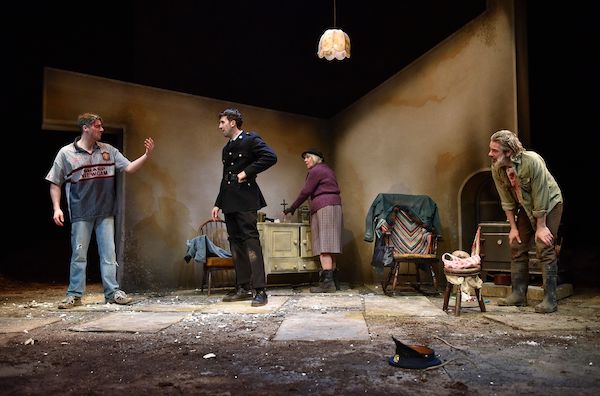 All four play their parts to the hilt. They seem to be suitably cast as their respective characters. O’Dowd is more than brooding as the mysterious gravedigger, whilst Heslin is adept at bringing a lighter touch to proceedings through his clowning outlook on life. They seem to be an excellent foil for one another, O’Dowd being measured in his delivery whilst Heslin rapturously delivers his role. It is at times watching a double act in the making, with one clearly being the straight man to the other’s comic genius.

Humour can be a funny thing. Much of McDonagh’s work has espoused much comedic value from his eclectic storytelling. His cinematic work is resplendent of this. In Bruges is a black comedy film about two Irish hitmen, Seven Psychopaths is a dark comedy that derives its humour from a concoction of odd characters and his most celebrated of movies – Three Billboards Outside Ebbing, Missouri – is another dark portrayal of a quest for injustice which is notable for its jocularity. 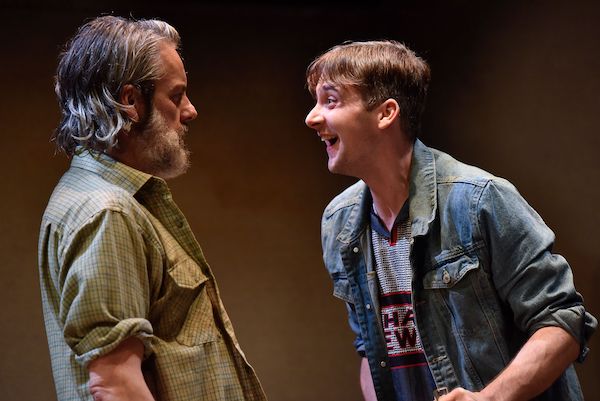 It’s interesting to watch McDonagh’s early work, where you can see a strand of what makes his plays so unique. All the elements that later characterize his works are there for all to see, the focus on characterization, the spotlight on the situations that in reality seem absurd and the sombreness of the story itself. Yet, at times through clever bits of writing and direction, there comes a time where you cannot help but laugh at the ridiculousness of what unfolds.

Helping to illuminate that hoopla within the dark undertow is lighting designer Stewart Bartles. His approach to allowing little light on Katie Scott’s wonderfully constructed set as possible permits not only the characters to shine under the spotlight, but to also create the ambience that the story is not just some silly romp. It reinforces the sinister plot, so much so that in the high dramatic moments the darkness of the stage coupled with the darkness of the ensuing story engulfs the audience as one.

Verdict: A dark, black comedic tale of a gravedigger and the suspicions around the death of his late wife, all come to the surface in this excellent production from the mind of BAFTA and Oscar winning writer Martin McDonagh.

What: A Skull in Connemara
Where: Oldham Coliseum
When: 22nd February 2019