Who doesn’t love a festive edition of their favourite show with their favourite characters? I recall that it used to be the staple of british television to put out their star shows in the festive season. Of course that medium is television and not the world of theatredom, where the seasonal offerings are your usual fare of pantomimes and other feel good shows. Nevertheless, HOME Manchester have decided to bring back a festive edition of Monkeywood’s Manchester Project, with surprising results.

For those that do not remember The Manchester Project, it was a show that won plaudits when it was first staged as part of HOME’s Push Festival in 2018. I, myself, was won over by their production.

“19, tiny, titanic and thunderous plays in an hour exploring what it means to be all things Manchester. Overseeing this project are Monkeywood Theatre, who make no bones about being a Manchester theatre company. They live there. They work there. They play there. They are Manchester through and through.”

So in the same vein, The Manchester Project at Christmas, presents “14 micro-plays of Christmas (and a couple for the new year) by a stellar line-up of writers and actors from across Manchester.” 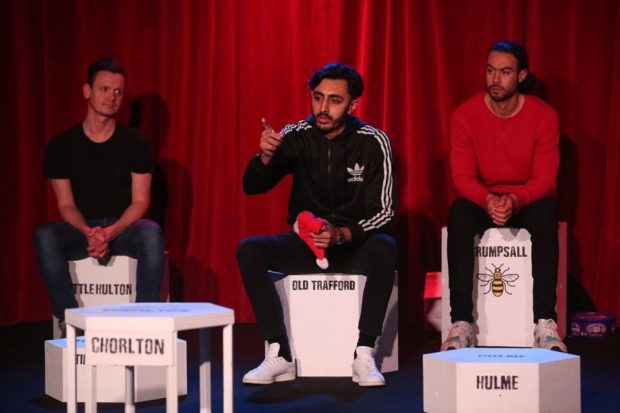 Firstly the setting is the Gallery. A wonderful rouse by HOME to make use of their space. The welcome is perhaps the best I’ve ever encountered. The stage dominates the floor, but instead of a conventional theatre space for a production of this calibre, we have an array of tables and chairs, a kind of bistro feel to proceedings. It’s homely and laid back. There’s even mince pies. Making the viewer as comfortable as possible, by the time the production starts, I could be in my living room, sipping on a glass of juice, nibbling on some snacks, feet up, wanting to be entertained.

Whilst the little things lifts this production to another level, you still have to have the substance within the show to leave the audience with that same kind of feeling that most of them had first time round.

Fourteen micros plays that are wonderfully about the kind of people that live in this part of the world. An array of characters that you can instantly identify with, from a range of subjects that do not shirk from the more unsavoury aspects to the festive season. This is warts and all. And so it should be.

Verdict: For I’m one of those Mancunians. I’ve lived here. I’ve grown up here. I work here. I know the people that they speak of, those Mancs that live in the places that they talk of. This isn’t just a show about the people that have written it, it is about you and me.

What: The Manchester Project at Christmas
Where: HOME Manchester
When: 11th December 2019