If you are reeling from the absurdity of what you have just read, then think on. For I’d say that it encapsulates those that try to view anything that is considered to be artistic and to add gravitas by trying to explain it. The attempts by man or woman to give meaning to art, to try to lift it to a higher plane, to give meaning to this discourse should be treated with the disdain that it deserves. Just because you like something, doesn’t necessarily mean it is likeable, or worse, that it is incomparable – which brings me neatly onto Rothko.

Rothko is a painter of some repute, who mainly deals with abstract exhibitionism. The thing is, people will go gaga over his exhibitions and his paintings. Yet, in the back of my mind is that niggling feeling that it absurd to try to give Rothko’s creations some sort of importance because we see something in them that needs validation. Take Rothko’s so called Red period and the following quote:

The multiforms and the signature paintings are, in essence, the same expression of basic human emotions as his surrealistic mythological paintings, albeit in a purer form. What is common among these stylistic innovations is a concern for “tragedy, ecstasy and doom” 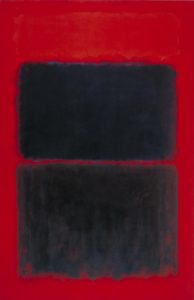 To think I thought the painting this quote is referring to was just a canvas covered in shades of red and black paint. The fact is, it is. If I had painted a canvas in red and black, people would say, it’s a canvas daubed in red and black. That’s all it is. Of course once everyone knows it’s Rothko, it’s suddenly elevated. It becomes more than the canvas. And it is this fuzzy line of appreciation and critique that I find most unsettling.

This brings me neatly back to the humble paper clip. Art can be summed then by these three words

Any art for that matter, be it theatre, be it film, be it music, wants to be elevated to a higher plane for us to comprehend.

Then I had an epiphany and it was due in no small part to the 1981 Oscars and the award for the Best Film. The year in question, the award for Best Film went to a film called Ordinary People starring Robert Redford. I’d be staggered if people could recall it. I’d be even more staggered if it ranked highly in any lists of great movies over the years. The problem is, that same year also saw the release of Raging Bull, The Elephant Man, both of which were nominated – as was The Shining, which not only was not regarded as worthy for consideration but also lambasted by critics and audience alike. A few years later it is regarded as a bona fide classic. Ordinary People on the other hand. Well, meh.

Roger Ebert was a famous film critic and historian. He was also the first critic to win the Pulitzer Prize for Criticism. When he reviewed The Shining in 1980 he was less than complimentary. In 2006 he inducted into his Great Movies series.

Clearly, sometimes critics – even Pulitzer Prize winnings ones – get it wrong.

When the chance came along to understand criticism from critics themselves and the art behind critiquing I decided to grasp the opportunity. The resulting outpouring of views, reviews and opinions is the form of this blog.

So here I am. In a room full of strangers. Being spoken to by a couple of noteworthy critics, who make critiquing their passion. Theatre is their vocation, but for me, it doesn’t matter, it’s the art of a critic, understanding the nuances in detailing the elements that allows us to appreciate art for what it is.

I’m excited to see where this journey takes us.

being a critic, Critic, criticism, Rothko, the paper clip